The Centers for Medicare and Medicaid Services (CMS) recently announced the results of their Hospital Value-Based Purchasing Program for the 2020 fiscal year, with an estimated total $1.9 billion available for value-based incentive payments.

With an average net increase of 0.60 percent in payment adjustments, it’s unlikely that these bonuses will affect significant change in hospital revenue trends. The Value-Based Care initiative is, however, one way to ensure a holistic patient-focused approach to healthcare in a consumer-centric market.

These concerted efforts to improve care quality and overall patient experience have had a positive impact on hospital financials.

At a granular level, this rise in average net patient revenue becomes much more complex. In this blog, we break down the financial metrics to gain a better understanding of recent revenue changes.

Average year-to-year revenue change is on the decline

In the past five years, hospital average net patient revenue has grown by almost $52 million—an undeniable upward trend in financial performance. At the same time, the average change or increase in net patient revenue year-over-year has decreased in dollar amount. 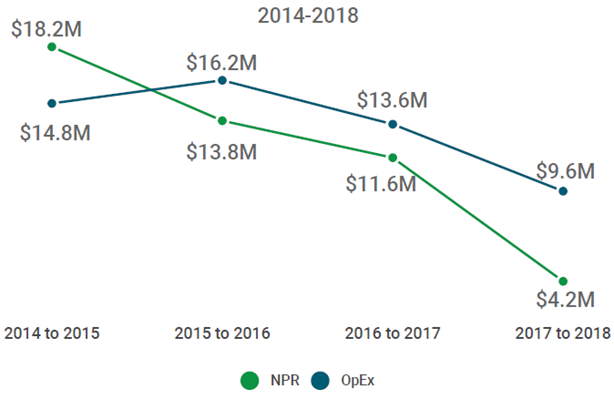 From 2014 to 2015, for example, the average increase in net patient revenue was $18 million, while the change was only a difference of $4 million between 2017 and 2018. Despite consistent success in net dollars earned, this decline shows a slowing trend in revenue growth.

The trend is similar on a regional level, as well. Hospitals in the western U.S. report average net patient revenue increases much greater than the national numbers—with an increase of $24.6 million from 2014 to 2015, and a change of only $4.7 million between 2017 and 2018.

While smaller hospitals may see lower increases in net year-over-year earnings by dollar amount, a review of the same revenue trends by percentage change indicates a much more competitive performance at these facilities.

Since 2015, hospitals with 25 beds or fewer have reported percentage increases in net patient revenue that were notably higher than national averages. With an average year-over-year revenue increase of about 4.33 percent during this time, smaller hospitals rival facilities with 251 to 500 beds in terms of revenue growth rate. Despite this, hospitals with the greatest number of beds still show the highest year-over-year change in revenue growth.

At a regional level, hospitals in both the northeast and west are reporting average year-over-year increases in operating expense by dollar amount that are significantly higher than national averages. Western hospitals, in particular, are showing the greatest increases in average operating expense both in terms of dollar amount and percentage change.

Interested in learning more about revenue trends, and how you can leverage financial data to sharpen your sales strategy? Definitive Healthcare provides detailed financial metrics for over 8,800 U.S. hospitals and health systems. Start a free trial today to see how you can: